From raw material to customer 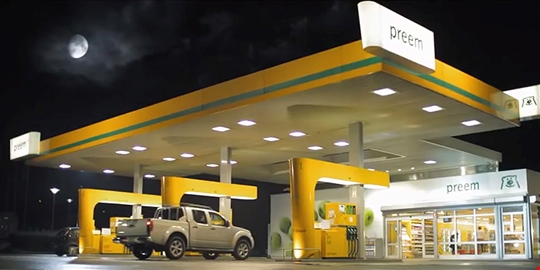 Preem conducts extensive refinement of crude oil and the sale of petroleum products to oil companies active in Sweden and on the international market, mainly in north-western Europe.

Preem is Sweden’s largest fuel company and accounts for 80 percent of the Swedish refinery capacity and 30 percent of the Nordic refinery capacity. Our two refineries in Gothenburg and Lysekil are among the most modern and environmentally adapted in Europe. In total, they have refining capacity of more than 18 million cubic meters of crude oil per year and around two-thirds of the production is exported. This means that Preem is also one of Sweden’s largest export companies.

Sales of gasoline, diesel, fuel oil and lubricating oil on the Swedish market take place through Preem’s own marketing channels, certified resellers and gas stations. Preem has a nationwide network of around 600 filling stations for private and commercial traffic. About 170 of them are Såifa facilities that are specifically adapted to heavy traffic.

We also produce lubricants at our lubricant factory Scanlube in Gothenburg. The main part of production is sold under the Texaco brand.

Both of Preem’s refineries in Lysekil and Göteborg are organized and operated as one joint refinery - Preemraff.

Our vision is to lead the transformation towards a sustainable society.