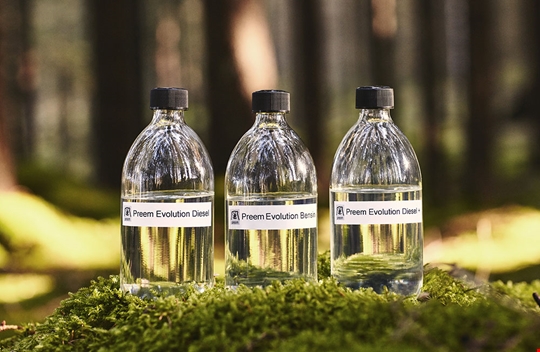 Can a fuel company be part of the solution to the greatest challenge of our time, climate change? We think so. Preem is now working hard to develop fuels that will have a significantly lower climate impact when used. Our goal is to produce at least three million cubic meters of renewable fuel by 2030. We think we can meet that goal thanks to innovations such as Preem Evolution Diesel and Preem Evolution Gasoline, which work in modern engines.

Sweden has ambitious sustainability goals for the future. The Swedish government has stated that the Swedish vehicle fleet should be fossil-free by 2030. Preem welcomes these high ambitions. If we do not continue investing in the development of sustainable products, we will risk market irrelevance in the long term. We also believe that we have a unique opportunity to take the lead in this process.

Preem is a fuel company, not an oil company. As opposed to most refineries, we do not have our own sources of oil; our business is based on purchasing raw materials and producing fuel. The raw materials we purchase do not have to be from fossil sources. Our refineries are already capable of using renewable raw materials in production, and this capacity can likely be doubled many times over under the right conditions. We already have the expertise required throughout the value chain from raw material to fuel. To put it simply, Preem has every opportunity to take a leading role in the Swedish transition to a fossil-free vehicle fleet.

One of the greatest risks associated with Preem’s sustainable products is introducing a renewable product that is not in compliance with the Swedish Act on Sustainability Criteria for Biofuels. This would lead to non-compliance with the terms of the mandatory quota for green house gas reduction, which stipulates that fuel suppliers must reduce greenhouse gas emissions from gasoline and diesel by 40 percent by blending them with sustainable renewable products by 2030.

We have developed a series of exciting products to reduce Swedish fossil fuel needs since the launch of Preem Evolution Diesel in 2011. We redouble our efforts each year and nearly 20 percent of the fuel we sell in Sweden is now renewable.

In 2017, the use of Preem Evolution fuels helped cut Sweden’s carbon dioxide emissions by 730,000 metric tons.

ISCC certification is closing the gap to exporting renewable fuels

What’s in the renewable tank?

Which raw materials can, and should, be used in renewable fuels is a complex question. We always conduct a review that goes beyond applicable legislation when a new raw material of interest is identified. Preem assesses raw materials from a variety of perspectives. Is the raw material economically sustainable? Is there enough of this raw material? What are the technical, ethical, political and environmental implications of production? What risks may be associated with the product and its origin? We use several guiding sustainability criteria in these assessments, three of which are presented below.

Preem is focusing on sustainable and certified raw materials available in Sweden, such as pyrolysis oils that can be made from sawdust, or lignin, which is a residual from paper mills.

Tall oil accounts for a large share of the sustainable raw materials used in Preem’s renewable fuel production. It is a residual mainly of the Swedish forest and paper industry and is one of the most climate-efficient raw materials among those currently available on the market. Tall oil is refined into crude tall diesel at Preem’s jointly owned factory in Piteå, SunPine, which started up in 2010. It is then refined into renewable diesel at Preem’s Gothenburg refinery. 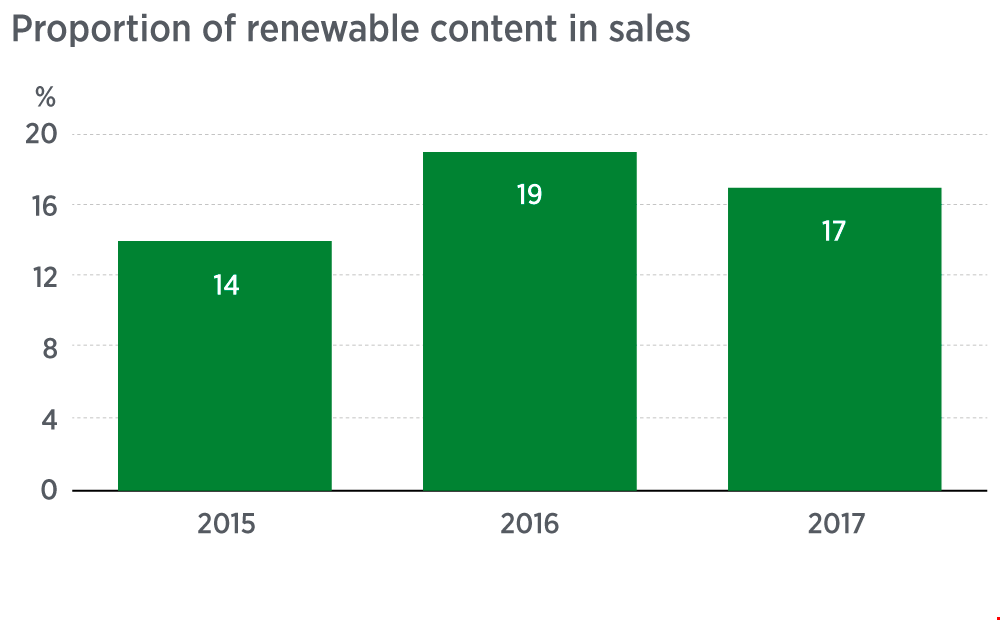 The proportion of renewable content in sales was lower in 2017 than in 2016. This is mainly due to a decrease in the availability/blend of HVO and to Preem product sales increasing in absolute terms.

Preem has a vision to lead the transition toward a sustainable society. Renewable sources currently account for less than one percent of our total fuel production. But we are continuing to develop fuels with an ever-higher proportion of renewable content, and we have our sights set high – this 1 percent should be at least 15 percent by 2030.

Preem is also making a major investment in our business development section. We plan for this organization to be twice as large as it is now by the end of 2018, so we can step up the speed and intensity of our sustainable fuel research and development efforts.

Long-term political regulations on renewable content are needed for implementation of Preem’s plan for 2030. The regulations were short term when we first launched Preem Evolution Diesel and we only knew the requirements for one year at a time. This was not a financially secure foundation to build on considering the investments required, but we made them anyway. We see the mandatory green house gas reduction on fuels  that enters into force in 2018 as a shift toward more long-term legislation. This will give us greater scope to make the investments and changes required.

Our goal is to produce at least three million cubic meters of renewable fuel by 2030. 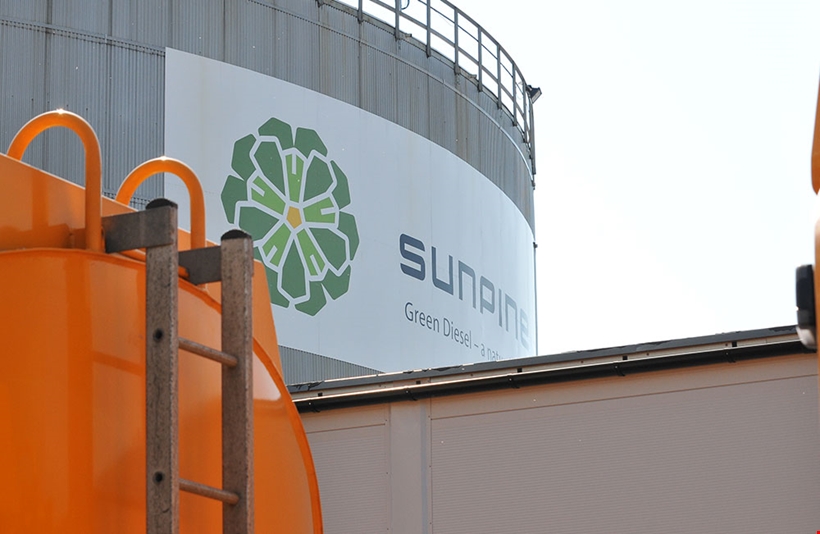 SunPine is a world leader in the production of second-generation renewable raw materials. The plant produces 100,000 cubic meters of crude tall diesel annually, which is used in renewable fuel production at Preem's Gothenburg refinery. SunPine is owned by Preem, Sveaskog, Södra skogsägarna, KIRAM and Lawter. Read more about SunPine here (in Swedish).