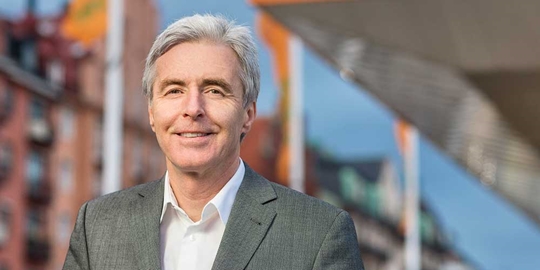 Preem’s focus in 2017 was on safety, sustainability and investments. Its operations were characterized by several large projects to strengthen competitiveness and efficiency. Despite a volatile market and a planned turnaround in Gothenburg, our financial performance was among our strongest ever.

Preem operates in a cyclical market where both commodity prices and product prices are subject to great fluctuation, and the past few years have been no exception. Following the high levels of 2014 when crude oil at times was at USD 114 per barrel, the price hit a low of USD 26 in 2016. The goal for OPEC and Russia has been to re-establish a stable price level for crude oil of over USD 60 per barrel, which they have done a good job with so far, as we saw an increase in crude oil prices during the year from around USD 55 to USD 66.5 per barrel.

Preem’s operating profit for 2017 was SEK 4.5 billion, an 18 percent increase from 2016 and our second-best year ever – an achievement we are proud of. The high capacity utilization of the refineries is a contributing factor to this solid performance, which in turn led to higher volumes of products produced and lower environmental impact.

The Refining segment succeeded in maintaining consistent operation during the year with few incidents and a well-conducted turnaround in Gothenburg. The turnaround involved everything from replacing vessels and compressors, which needed to be replaced given their age, to modernizing safety systems.

The Marketing and Sales segment was highly successful in solidifying Preem’s strong position in a market that is difficult to predict. The segment’s financial performance for 2017 was strong, with an operating profit of SEK 581 million. Store sales continue to deliver, increasing by 1 percent in an otherwise stagnating market. The expansion of Preem’s sales in Norway has also been a success and gone significantly faster than expected; we have already reached a market share of over 10 percent on the Norwegian market through both organic growth and the acquisition of YX Bulk.

Preem’s segment Supply & Trading is optimizing operations successfully by being flexible in its crude oil choices. The combined operating profit for segments Supply & Refining was SEK 3 339 million, which exceeded projections by SEK 1 063 million, largely due to better crude oil choices. Intensive efforts are ongoing in Supply & Trading to secure purchases of HVO and sustainable, renewable raw materials for Preem’s future production, as well as to obtain certification for our trade in green products.

As employees across Sweden were given the opportunity to share their opinion in Universum’s annual survey, Sweden’s Best Employer, Preem came in second place in the Large Companies category. Preem’s employees enjoy their fast-moving workdays with several large ongoing projects. Our own annual employee survey, the Preem Barometer, points in the same direction. In 2017, Preem’s eNPS value, which indicates the degree to which employees recommend their employer to others, reached +40, giving us one of the best eNPS values in Sweden. For me, this is a testament to the strong sense of belonging and excellent teamwork at Preem.

I am also very pleased with the great progress in reliability we have seen in recent years. In 2017, we had the lowest level of absences due to accidents since we began tracking this metric: 1.0 per million hours worked. Yet, we naturally continue to strive for ongoing improvement. Our safety efforts can always be improved, and we will never be fully satisfied until we reach zero.

We can draw the conclusion that Preem’s employees go against the general trend in Sweden toward increasing sickness absences given that healthy attendance reached 97.5 percent for 2017, a 0.2 percent improvement from the already very high levels of 2016.

Sustainability on the agenda

Preem has had sustainability high on the agenda for many years, and it is by far one of our most important future issues. We work continuously on transitioning our business to sustainable production. Preem is issuing a complete sustainability report for 2017 in compliance with the new requirements of the Swedish Annual Accounts Act. I welcome this opportunity for increased self-evaluation and believe it will lead to better transparency and valuable insights. We are very satisfied with our results in some areas, while in others we see potential for improvement and the need to redouble our efforts.

Preem set an ambitious goal to produce 3,000,000 cubic meters of renewable products by 2030. As a percentage of our total production, this is equivalent to an increase from less than one percent now to over 15 percent. We have planned a series of investments for meeting our production goal, including the planned construction of a hydrogen plant that will add 60,000 cubic meters of renewable fuel to our production capacity. However, investments of this type require a clear political direction and consistent policy instruments, which Preem has sought for years.

A law governing reduction of greenhouse gases will take effect in 2018. This entails an obligation to cut greenhouse gas emissions by blending biofuels into gasoline and diesel. The quotas as proposed will be gradually raised to achieve a 40 percent decrease in carbon dioxide by 2030. All biofuels used in complying with the law must also meet specific sustainability criteria. Tall oil and forest residuals – which Preem primarily uses – have been highlighted as exemplary, while palm oil and PFAD are considered non-sustainable raw materials. This is in line with Preem’s high standards for the long-term sustainability of our raw materials and our aim to not replace one environmental problem with another.

We can benefit from using the residuals of Swedish forests to an even higher degree than we do now, such as by decreasing our dependence on crude oil from other countries and by becoming more self-sufficient in renewable raw materials. This creates new green jobs and business opportunities in Sweden.

Passing the law on mandatory inblend system is a crucial step on the road to a fossil-free vehicle fleet, but it is not enough. We think that the bar should be set even higher, especially for gasoline. It can be clearly seen that Preem has an interesting role in society, especially considering the great interest in visiting our refineries from federal and municipal politicians. In October, Prime Minister Stefan Löfven paid a workplace visit to Lysekil, which gave us a good opportunity to express our opinions on the future.

We are also expanding our capacity to increase vacuum gas oil (VGO) production at the Lysekil refinery. VGO is a key raw material in gasoline and diesel production, and we currently import around 50,000 cubic meters of VGO per month. The investment will make Lysekil self-sufficient in VGO, and Preem will reduce its heavy fuel oil production, replacing it with high-quality, desulfurized fuels. We will thus also be able to receive and upgrade heavy fractions from other refineries in Europe that do not have our modern refinery systems. The new plant will be completed in 2018.

We also worked on a feasibility study for building a residue hydrocracker in Lysekil during the year. The new plant would enable Preem to convert up to 90 percent of the heavy fuel oil currently produced at the refinery into sulfur-free gasoline and diesel. This investment is fully in line with Preem’s aim to optimize the use of all raw materials. The investment also complies with the regulations on reduced sulfur content in shipping fuel, which will decrease the market for heavy fuel oil.

It will be a big delivery year for Preem in 2018 as many of the extensive projects of recent years are completed: the new hydrogen plant in Gothenburg, the increase in VGO production in Lysekil and the modernization of our ERP system. In Lysekil, the residue hydrocracker project will reach the end of its analysis, contract and design phases in 2018. Finally, we will dedicate a great deal of energy and resources to preparing for the turnaround in Lysekil in 2019. An enormous amount of preparatory work must be completed to secure the procurement of construction contracts and equipment.

I believe that we are well equipped for new market conditions with many good years ahead of us. Our vision to lead the transition toward a sustainable society informs our long-term efforts, and our values – innovation, responsibility and inclusiveness – guide us in our daily activities.

In conclusion, I would like to thank all our employees for a fantastic year. As always, they contributed their expertise, positive energy and great dedication. Together, we are working toward our vision and solid results to ensure that Preem is a safe, sustainable, engaging workplace.